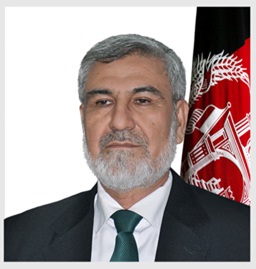 Mr. Nasir Ahmad Durrani is minister of Agriculture, Irrigation, and Livestock of Afghanistan.

Mr. Durrani earned his BA degree in Mechanical Engineering from Kabul University and received his MA degree in Development and Reconstruction from the Nebraska University of the United States.

Durrani completed his primary and secondary education in

Durrani’s background shows that in addition to his determination in his professional life, serving people, especially those of farmers and rural villagers are one of his priorities.

Mr. Durrani has traveled and praised for many times abroad, for attending seminars, workshops and meetings. For example, during his trip to the Philippines, he received appreciation letters for managing Small Industries Development.

Mr. Durrani has been working with national and international institutions since 1980.

Mr. Durrani worked as technical advisor at VISTA in Peshawar in 1986 and then was appointed as general manager for investment at Ministry of Mines and Petroleum in 1980.

Durrani was appointed as administrative director at Ministry of Public Work in 1993.

He was serving as deputy minister for minerals management of mines at the Ministry of Mines and Petroleum from 2010-2014 where he was working as senior advisor before.

Mr. Durrani was working as director of the Afghanistan Energy Sector Assessment Project with French Super Gas company from 2003-2005.

Mr. Durrani has achievements during his tenure at the Ministry of Mines and Petroleum such as “Legalization of Mining Eliciting.”

He prevented illegal eliciting of 194 coal mines in Bamyan in 2010.

Mr. Durrani was working as minister of rural rehabilitation and development from 2014-2017.

During that time, he worked on “citizen’s charter program” plan which was the biggest feat of National Unity Government (NUG) for balanced development.

He also implemented lots of development programs throughout the country’s villages for poverty alleviation.

Based on his excellent performance at Ministry of Rural Rehabilitation and Development, he was subsequently appointed as minister of agriculture, irrigation, and livestock in order to improve the agriculture sector of the country.